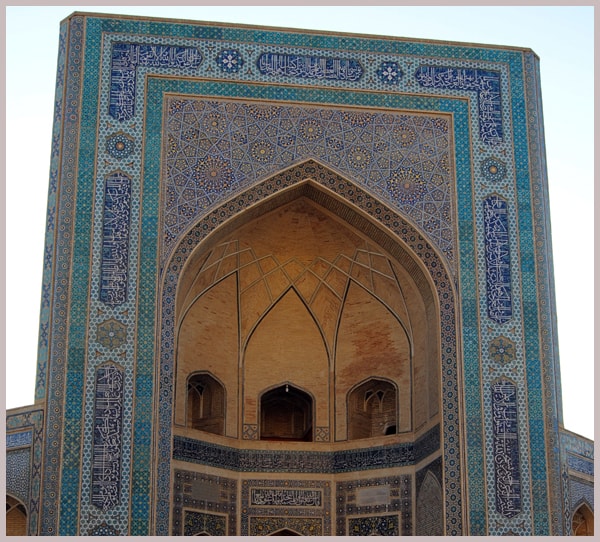 Day 1: Tashkent
Upon arrival your guide will meet you at the airport and you will begin your travel. Today is dedicated to a sightseeing tour in Tashkent. You will start off the main Independence square, take a stroll along the local Broadway until you get to Amir Timur square. Further you can take a ride in one of the most beautiful subways in the world - Tashkent metro. Then you will head to the old part of the city where you will spot: Chorsu Bazaar, Kukaldash Madrasah and Hast Imam complex that consists of several madrasahs, mosques and mausoleum. You will see the world's oldest Quran copy dating back to 8th c. Quran belonged to the Third Caliph of prophet Mohammed - Othman Ibn Affan. At the end of the day your transfer will take you to the hotel.

Day 2: Tashkent - Samarkand
After the breakfast you will be transferred to railway station of Tashkent to take a ride till Samarkand and continue your travelling. Today you will have a guided city tour. The main attractions are concentrated in the center within walking distance from each other. We will start with Registan Square. The ensemble of the square includes three madrasahs of the 15-17th centuries. Visit Architectural complex of Shakhi-Zindeh representing a big collection of mausoleums dating back to 11th-15 centuries. It is also a part of a UNESCO World Heritage Site.  And of course you will see Bibi Khanum Mosque. It was built in honor of Tamerlane's favorite wife. Overnight is at the hotel.

Day 3: Samarkand - Bukhara (morning train 10:15-11:45)
In the morning, you will get to Bukhara by train and continue your tour in Uzbekistan. With more than 140 architectural monuments, Bukhara is a town-museum dating back to Middle Ages. You will visit Ark Citadel, which served as a palace for several dynasties of Bukhara Empire, Samanids mausoleum, a real masterpiece of architecture of 9th -10th century. Then you will go to Chashma Ayub and the mosque of forty columns, Bolo-Hauz built in honor of Bukhara governor Abu-Fayud Khan. On the way to one of the most famous madrasahs of Bukhara, Nodir Divan Begi, you will have a chance to buy souveniers in shopping domes. You will finish the day visiting Poi Kalon complex. This unique architectural art of Bukhara consists of three structures built in the 12th - 16th centuries: Kalon minaret, Kalon mosque and Mir Arab Madrasah. Night is in a hotel.

Day 4: Bukhara
Todays' sightseeing plan of the tour is to explore surroundings of Bukhara. Once the city was a center of learning renowned throughout the Islamic world. It is the hometown of the great Sheikh Bakhouddin Nakshbandi. He was a central figure in the development of the mystical Sufi approach to philosophy, religion and Islam, on the territory of Uzbekistan. We will start with visiting his memorial complex. It consists of Kushbegi and Muzafarohana mosques, courtyard, madrasah, and burial vault of Bukhara rulers and tomb of Saint Bakhauddin Nakshbandi. Then we will drive to Sitorai Mohi Hosa complex, the star and moon like palace. It was named after young wife of Bukhara's Emir. The palace is the combination of various architectural styles. Afterwards you will drive to Sumiton village to visit Chor Bakr memorial complex, the town of the dead. After excursion you will be transferred to the hotel.

Day 5: Bukhara - Khiva
In the morning we start our drive to continue the tour to Khiva. The town is situated on the left bank of the Amu Darya in the southern part of the modern region of Khorezm in Uzbekistan. It is a unique monument town, completely preserved in the cultural style of the region. In 1967 it was proclaimed a town-reserve and since 1990 one part of Khiva - the Itchan-Kala - was recognized by UNESCO as an historical monument of world significance. The road from Bukhara to Khiva goes through famous Kizilkum desert. On the way we will enjoy the view to Amu Darya formed by the confluence of the Panj and Vakhsh rivers in Tajikistan and flowing into Aral See. Upon arrival you will have free time. Night is in a hotel.

Day 6: Khiva
Today you will have a wonderful sightseeing tour in the oldest city of Uzbekistan, included in all tours. In Khiva there is another inner city - Ichan-Qala. Ancient buildings, palaces, mosques, Madrasahs, Mausoleums, Minarets, Caravan-Sarais and Bathhouses transformed Ichan-Qala into unique historical monument. It consists of over 400 traditional dwelling houses and about 60 architectural monuments all surrounded by thick walls. The most remarkable sites are the Kunya-Ark fortress dating back to 17th century, found by Muhammad Arang Khan, Kalta Minor minaret and Tash Khouvli palace, an incredible example of Khorezm architectural mastership of 1830s. Overnight in a hotel.

Day 7: Khiva - Tashkent
In the morning is flight to Tashkent to finish the tour. Today is devoted to a sightseeing tour in Tashkent. We will visit ‘Courage' complex dedicated to the 1966 earthquake. It is one of the most significant monuments in today's city. Then  we will continue to Zangi Ota memorial complex. According to legend, Zangi-Oota was a shepherd, who got fame for his wisdom and good deeds. The day will continue with excursions in the State Museum of Timurids' and the State Museum of Applied Arts of Uzbekistan, where you will explore the history of Timurid's period and local craftsmen works. Night is in a hotel.

Day 8: Flight
Transfer to the airport is in the morning.