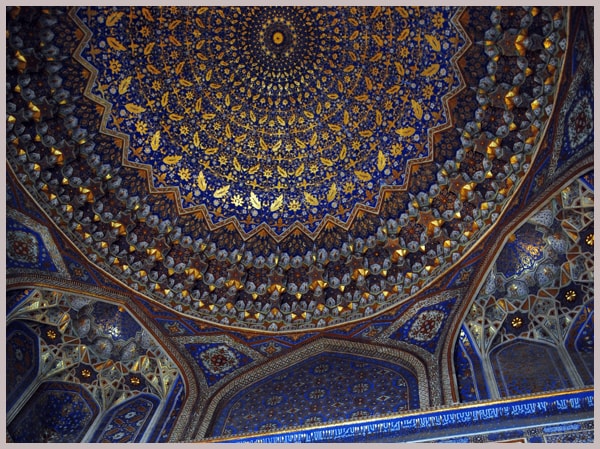 Day 1: Tashkent
The guide is waiting for you at the airport and takes you to Tashkent. You start your travel and today you will have a city tour of this wonderful city. Tashkent is the capital of Uzbekistan and the largest city in the country. The city tour begins with a tour of Independence square, built as a symbol of victory over fascism in world war II. After the walk, you will see the pedestrian street between Independence square and Amir Timur square. you will see the famous metro in Tashkent.The first line was opened in 1977. Then tours of the old city, which includes: Chorsu Bazaar, Kukeldash madrasah and Khast Imam complex. There you will see one of the oldest copies of the Koran. It once belonged to Osman Ibn Affan, the third Caliph (of the four righteous caliphs who succeeded the prophet Muhammad). The Caliph's blood was spilled on the Koran when he was killed. This blood can still be seen on the Koran. You will stay in the hotel today.

Day 2: Tashkent - Samarkand
Today you have a trip on the morning train to Samarkand. Samarkand is located in the valley of the Zarafshan river. In the middle ages, it was the center of the powerful Empire of Tamerlane. It produced the best paper in the world and excellent velvet, colored glass, and silk. You will start your tours of the city with its business card - Registan square. This is the heart of the city and one of the most famous attractions in Central Asia. You will see the necropolis of Shahi-Zinde, the mausoleum of Guri Emir and the bi bi Khanum mosque. The Shahi-Zinda architectural complex is a large collection of mausoleums dating from the 11th and 15th centuries that are part of the UNESCO world heritage site. Tamerlane ordered to build the construction of this mosque in mourning for his beloved wife Bi-bi Khanum The night is spent in a hotel.

Day 3: Samarkand - Tashkent
Today is the second day of walking in Samarkand of your travel adventures. You will visit the Ulugbek Observatory, built in the 15th century by Ulugbek.  He proved to be a talented researcher in astronomy and mathematical Sciences well acquainted with the works of his predecessors. The result of his scientific work is the so-called "New astronomical tables", containing a statement of the theoretical foundations of astronomy and the coordinates of more than 1000 stars. Then you will walk along a pedestrian street surrounded by souvenir shops, tea houses, sweets and workshops. Then there is a tour to the largest and oldest Bazaar Siab, it consists of 7 pavilions. where they sell traditional bread "tandoori bread", sweets, meat, fruits. You can also visit carpet factory, where about 400 women sew carpets without using traditional techniques. At the end of the day, you will visit the Samarkand paper workshop, where silk paper is produced. Transfer to Tashkent, the capital city of Uzbekistan. Overnight at the hotel.

Day 4: Flight
In the morning you will be driven to the Airport.