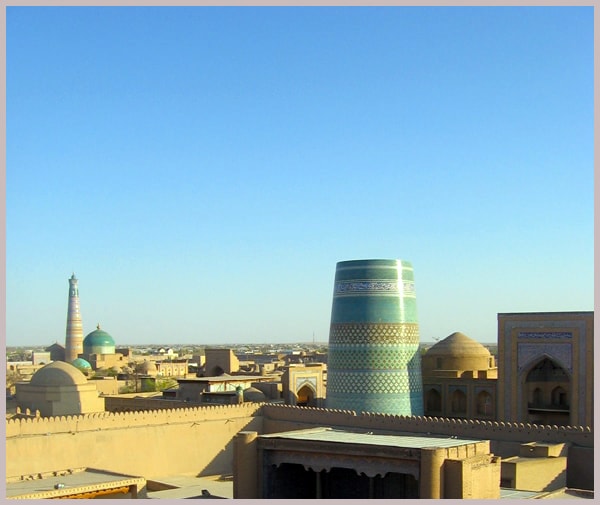 Day 1: Tashkent
After meeting at the airport, you will begin a tour of Tashkent and begin your travelling. The tour begins with a visit to Victory Square, the main square of the city, which was built in honor of the victory over fascism in world war II. Then the walk will continue along the pedestrian street between Independence square and Amir Timur square. You will go down to the Tashkent metro, the first line of which was built in 1977. The tour includes a visit to the old city - Chorsu Bazaar, Kukeldash madrasah and Khast Imam complex. This complex consists of several madrasas, mosques and a mausoleum. Here is a unique exhibit the oldest copy of the Koran, made in the 8th century. Blood was spilled on it in the murder of Osman Ibn Affan (3rd Caliph) which you can still see in its pages. After city tour you will have rest in the hotel.

Day 2: Tashkent - Samarkand
In the morning your tour guide will pick you up from the hotel and you will continue your journey to Samarkand by train. This ancient city is located in the valley of the river Zerafshan. it is the same age as such ancient cities as Rome and Babylon. Samarkand is the second largest city in Uzbekistan. Here you will visit such as places as Registan square, Shakhi-Zindeh, Mausoleum Guri Emir and Bibi Khanum Mosque. Registan Square dating back to 15-17th centuries This place has gained worldwide fame thanks to a magnificent architectural complex that has become a monument of Oriental a rchitecture.Architectural complex of Shakhi-Zindeh represents a big collection of mausoleums of 11th-15 . It is part of UNESCO World Heritage Site. Bibi Khanum Mosque was built in honor Tamerlane's wife, after his successful campaign in India. After excursion you will go the hotel.

Day 3: Samarkand - Bukhara (morning train 10:15-11:45)
In the morning you leave for Bukhara. Today is dedicated to the city tour of Bukhara, the best city for travelling. The city is a real architectural and historical and cultural reserve, which has preserved unique architectural monuments of all historical epochs, since the IX century. The city tour begins with a visit to an ancient citadel, 4th century called the Ark citadel, which served as a Palace for several dynasties of the Bukhara Empire. Then you will see the Samanid mausoleum, a real masterpiece of architecture of the 9th-10th century. Then you will visit Chashma-Ayub, which means the Well of job and the Bolo-Hauz mosque. this mosque was built in honor of the Bukhara ruler Abu-Fayud Khan. Then you have the opportunity to walk through the shopping domes and visit one of the most famous madrasahs in Bukhara called Nodir Divan Begi, built in 1622-1623, which is also part of the ensemble of the house of Lyabi. At the end of the day you will see to the Poi Kalyan complex. It consists of three structures built in the XII-XVI centuries: The Kalyan minaret, the Kalyan mosque and the Mir Arab madrasah. Kalyan madrasa is recognized as a masterpiece of Bukhara architecture, a monument of the V century. Overnight is in hotel.

Day 4: Bukhara
Today you will visit outside of Bukhara, you will have an excursion to the Bahauddin Naqshbandi complex, located a few kilometers from Bukhara. He was a great religious figure, also known as a Sufi teacher, and is considered the founder of the most significant Sufi Naqshbandi order. Sheikh Bahauddin Naqshbandi was one of Amir Timur's spiritual teachers. The complex served as the center of the dervish Naqshbandi order. Today, the complex consists of the mosques of Kushbegi and Muzafarohan, an inner courtyard with a pool, a madrasah and a tomb of Bukhara rulers and a dakhma on the grave of Saint Bahauddin Naqshbandi. After that is a walk in the country residence of Bukhara emirs called Sitorai-Mohi-Hosa Palace complex. The Palace is an example of a combination of different architectural styles. This Palace has the name "Star and moon Palace". It was built in honor of his wife, who passed away when she was young. Then the tours will continue in the village of Sumiton, where the Chor Bakr memorial complex, the city of the dead, is located. The complex symbolizes the four sides of the Earth and means that all people are equal. Construction of the complex began during the Samanid rule and continued until the 16th century. After the tours, you will return to the city.

Day 5: Bukhara - Khiva
After Breakfast, you will leave for the most ancient city of Uzbekistan-Khiva, full of history and interesting sights. The beginning of the history of Khiva goes back centuries to the time of the legendary state of khorezmshakhs with its capital in the former Urgench. Khiva has long served as the center of trade on the great Silk road. Caravans made stops here on their way to and from China. Columns of camels loaded with various goods passed through this area. On the way to Khiva, we will pass the famous Kyzylkum desert, which stretches across the territory of two States. On the way you will see the landscape of the Amu Darya river, the deepest river in Central Asia, formed by the confluence of the Panj and Vakhsh in Tajikistan) and flowing into the Aral Sea. You will have free time Khiva after arrival. The night is spent in a hotel.

Day 6: Khiva - Tashkent (evening flight, 21:20-23:00)
In the morning you will go to the airport to catch your flight to Urgench, then you will go to Khiva. Today you will be shown main sights of the oldest city in Uzbekistan. The city of Khiva is a very ancient city that includes 2 cities: Ichan-Kala and Dishan-Kala, the inner and outer city. Ichan-Kala is considered a very important historical heritage and therefore this object is under the auspices of UNESCO. Buildings, palaces, mosques, Madrasahs, Mausoleums, Minarets, Caravan-Sarais and Bathhouses transformed Ichan-Qala into unique city-monument.It consists of over 400 traditional dwelling houses and about 60 architectural monuments. The main sites in it are the Kunya-Ark fortress of 17th century, found by Muhammad Arang Khan, Kalta Minor minaret and Tash Khouvli palace. In the evening you are flying back to Tashkent. You will stay for a night in the hotel.

Day 7: Flight
In the morning you will go to the airport.