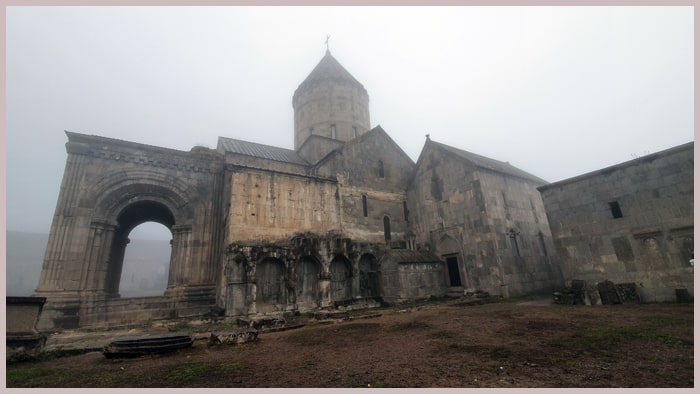 Day 1: Yerevan
Yerevan is the capital of Armenia and it is seen to be the tour starting with the meeting at the airport of the city. Here starts the sightseeing tour along the center of the city, located at the height of 900 to 1300 m. It is considered to be the greatest city of the country, being the cultural and scientific destination. The capital is known to be placed at the Ararat plain, being bounded by the Caucasus Mountains. At the same time it is famous for being based here since the 8th century BC. In the end of the first day of the trip we are going to have dinner in the local restaurant where the music of national views is playing. Hotel is taken in the city later.

Day 2: Yerevan - Echmiadzin - Yerevan
It is required to start the day with the viewing still of the capital of the country, identified with the observation deck of Victory Park. This tour is made to Cascade, which is the open-air museum. Going on the course is taken to the Opera and Ballet Theater and Sergei Parajanov Museum. For the next part of the day we are going to arrive for the Echmiadzin city, being the religious city of the country, known by all of the Armenians from the world. It is also considered to be the significant location where the Church of St. Hripsime (7th century) and the Mother See Cathedral of St. Echmiadzin is placed. For lunch the group gets to Machanents Creative Center and then having had rest they get to the following site, where the works of sculptor Kochar - Sasuntsi David are shown. For the opportunity to get closer the history of the country, it is required to visit the "Megerian Carpet" factory, where carpets of 400 years old are held. And later in the evening the stroll along the Northern Avenue and the Republic Square, with seeing of singing fountains is organized. Hotel is offered being visited for the night.

Day 3: Yerevan - Goris
For breakfast we offer the hotel and then the trip is made to the Ararat valley, giving the views of the Khor Virap monastery. This place is mostly famous for the history of the creation. And this history is the same of the times of the adoption of Christianity, in the 4th century. Before arriving for the Areni village, guests have a view of the picturesque mountains. So in the village of Areni guests take the sights of the Vayots Dzor region, famous for the wine-making history. The way of wine making is known here for about 6000 years old, the evidences of which were found in the cave in September 2008. Following, our invitees are moved to the Noravank monastery, being created in the 13th century. It is placed at the gorge. As lunch and rest is taken, we are glad to offer the viewing of  Goris. And here a walking trip as well as night in the hotel is organized.

Day 4: Goris - Yeghegis
After a short breakfast you take the driving trip along Armenia with visiting of Zorats Karer (Karahunj). It is known as the historical destination, being popular for the megalithic complex with giant red-brown monoliths located at the heights of 1770m. At the same time there are opportunities to find out that there was the observatory about the 6th millennium BC. Along with it, here there is a special wall, where the position of stars is depicted, right as they were shown on the sky about 7.5 thousand years ago. Tatev is then visited and it is identified as the gem if the country and ancient architecture. It is peculiar for the longest cable car being based here at the Vorotan gorge, 320 meters deep. Having had an enjoyable lunch we arrive for Yeghegis for the night there.

Day 5: Yeghegis - Sevan lake - Dilijan
Today the group gets to the height of 2500m, of the Selim Pass destination. It is mostly famous for the surrounding views being of extreme beauty. Please consider the visiting of the Lake Sevan, as it is known to be the pearl of the country, due to the fact if being the largest freshwater lake at the heights of 1900m. Later such places as Ayrivank and Noradus Monasteries are viewed and we are going to get the sights of the Tsaghkunk, where lunch is served. Then the guests get to the Sevanavank Monastery, created by Princess Mariam in 874. The peculiarity of this location is found in the peninsula basement. Here the land is amazing even just for being surrounded by the mountains. In resort town Dilijan guests enjoy woods and fresh air for then being covered with the history of the 19th century town here. Night is planned to be spent in the hotel.

Day 6: Dilijan - Gyumri
The day is going to start with fresh coffee and breakfast for then being moved to the Lori region. It is one of the most famous regions of the country, including the sighting of Sanahin and Haghpat monasteries. These monasteries are known to be included in the UNESCO World Heritage List, as for the amazing landscapes of thick forests and stone canyons of the Debed River. Please have lunch in the Kefoe restaurant, where traditional dishes are served. As getting to Gyumri, guests are aware of it being the second largest one in the country, as well as the cultural destination. Being here notice the local museum having five churches, a monastery and an Orthodox chapel at its territory. As well the locals have great pride of the Amenaprkich Church (Church of the Savior). In the Gvug gastro-yard we have lunch and then arrive for the hotel, where night is reserved.

Day 7: Gyumri - Yerevan
Leaving Gyumri after breakfast the tourists get to Sev Berd, the Museum of Crafts and Frunzik Mkrtchyan. After it lunch is taken in the Cherkezi Dzor restaurant and the following destination of the city Yerevan is organized. Such a way to the capital is made along Mount Aragats and the Saghmosavank Monastery (Psalm Monastery), being found at the gorge of the Kasakh River. It is also possible to pay attention to the monument emerged here in honor of the 1600th anniversary of alphabet creation, being open here in 2005. Hotel is taken for the night in the capital of the country.

Day 8: Yerevan - Garni - Yerevan
We would like to offer the views of the prettiest canyon of the Azat River to be seen. It is also known to be the day when we get to see the Geghard monastery, being created in the 13th century. It is also peculiar for being the UNESCO World Heritage Site and being created in the very rock. So them we are going to continue the investigation of the country with seeing of the Garni village, famous obviously for the Symphony of Stones and a pagan temple. The temple here is made in the Hellenistic style. Our invitees are offered to pay attention that Garni village was created in the 77 AD. Lunch is served at the local resident's house, where traditions can be shown to the foreigners. Than in the process of returning to Yerevan, we all are able to get to see such famous destinations as the Yerevan Brandy Factory and ARARAT Museum, where true craftsmanship can be perceived. Hotel of the city is reserved for the night being spent there.

Day 9: Flight
Transfer to airport is offered for the visitants of Armenia.